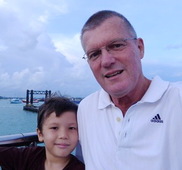 I was born and grew up in South London, UK, some time after the 2nd World War. I’m now something over 50 !

My early working life was in mechanical engineering, and included some memorable years travelling around the world on passenger liners as an Engineering Officer. Hard work and hard play.

I later settled into 12 years of medical work, part-clinical, part-engineering, in Reading,  west of  London. However, the lure of sunnier weather and greater financial incentive took me off to do six years of similar work in military hospitals in Jordan, Saudi Arabia and, latterly, Kuwait, as it was burning after the first Iraq war in 1991.

It was during this spell in the Middle East that I discovered Thailand by way of holidays in and around Bangkok, Chiang Mai, Koh Samui and Phuket; the standard tourist spots back in the 1980s, and to this day.

Twenty five years ago I decided to settle in Phuket, and have been here permanently ever since. Imagine a Phuket with the same fabulous beaches, little traffic and no mobile phones. You could actually concentrate on just ‘being’ and ‘living’ !  It was Paradise.  Things have changed, and while Phuket is a lot busier than it was two decades ago, it is still a great place to live, come for a holiday, to sample the Thai culture, food and people, and to get married !

Whilst in Phuket, I’ve built a couple of small boats, spent several years working with local media and publishing companies, and more recently in the property business. Now, however, my focus is on my marriage-celebrant work which I enjoy very much. There is something quite special and positive in seeing two people in love make their vows of commitment to each other in front of their friends and families and, of course, in some of the most spectacular and romantic locations in the world, right here in Phuket.

I have a Thai wife and my twelve-year-old son PJ (with me in the photo), both of whom keep me very busy. I have no plans to leave Phuket just yet.

What some have said about me !